Board Game Reviews and Session Logs

Maybe this will be session logs, maybe it will be game reviews. Anyway, this is a new beginning for my gaming blog. 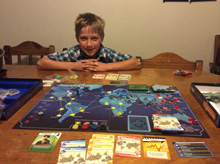 Friday, 2015-01-23, Isaac and I played Pandemic and, for the first time since purchasing the game, we (as the team of heros trying to save the world) won the game. We are still playing with the easiest setup, using only 4 Epidemic cards in the Players Deck. For those unfamiliar with the game, your goal is to find the cure for 4 viruses that are spreading across the world - you are playing against elements of the game, not against the other players, although there is an expansion available for the game that will allow one player to become the antagonist and spread the virus. We've been enjoying Pandemic quite a bit and it has been the most selected game for our occasional evening game sessions during the past couple months.

Ostia - The Harbor of Rome 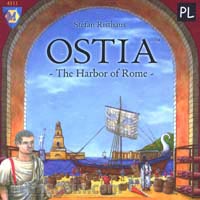 Wednesday, 2014-08-20, we played Ostia for the first time. This is a little auction/bluffing game that my brother, Tim, gave to me a couple years ago. I believe that he had originally purchased it as a game for himself, but when he got it home he decided it wasn't quite what he was interested in. When he gave it to me, I didn't have much hope for it either, but tonight we gave it a shot. After reading through the rules and explaining the game to Beth and Isaac, we got started. We were concerned, at least Beth and I were both secretly concerned, that the game was going to be boring. However, as the game progressed, we found that we really enjoyed it. The rounds were close in score, probably with much due to the fact that there were only three of us and scoring for the Senate donations gives 1, 2, or 3 victory points and we were all winning and losing favor in the Senate pretty evenly. The final round was quite intense, with Beth in the lead, followed by Isaac. Nathaniel jumped ahead at the end with the largest Senate donation and the most money. The final score was Nathaniel: 15; Beth: 14; Isaac: 12. I'm looking forward to playing again.